This post is not strictly related to the van but being a Queensland blog, I can’t neglect to mention the devastating floods that have affected much of the state in the last few weeks. And it does explain why progress on the van has stalled recently.

It had rained almost non-stop since November, a trend which continued over Christmas (when we were overseas and facing our own weather dilemmas in the form of blizzards and dysfunctional airports) and, if anything, seemed to intensify in the new year. Brisbane rain can be fairly ferocious so we hardly even left the house some weekends. Last Monday there was flash flooding at the train station, and I had to roll my trousers up to wade to the platform. Suede pumps were not the best choice of footwear that day.

And yet, despite this, we still had no inkling when we arrived at work last Tuesday that we’d be evacuated within a couple of hours. This is the wet season after all. But our office block is opposite the Brisbane River, which was rising quickly and threatening to burst its bank that afternoon. It all suddenly felt quite dramatic as people crammed onto the usually empty 11am train out of the city to check their homes / round up cattle and, in many ways, to make the most of half a day off. Because I don’t think we realised at that stage how quickly it would escalate into something so prolonged and catastrophic. By the time I got home, most TV channels had constant news coverage – which then continued for several days. 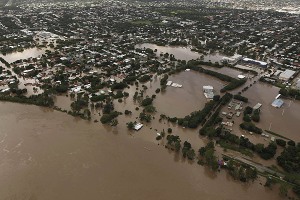 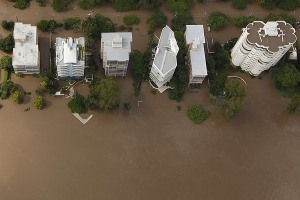 Thankfully we live well away from the river and at no risk of flooding. Of course, thousands of people living in the inner Brisbane suburbs and out west in Ipswich, Toowoomba and the Lockyer Valley were not so lucky. Sadly, there have so far been 20 deaths with more people still missing, and billions of dollars’ worth of damage. The enormous clean-up effort has now started and has seen thousands of volunteers turn out to help – the community spirit has been immense.

Paul returned to work  last Friday, but  my office block is not due to reopen til 24th January due to extensive flooding around the electrics in the basement. 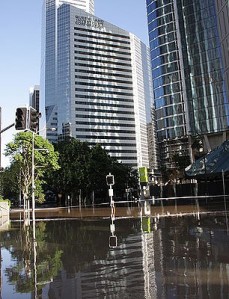 Usually the prospect of two weeks off work would be fairly appealing, but it’s been a strange time. We registered for the volunteer effort straight away, but they have been so inundated (no pun intended) with people offering help, we haven’t been contacted yet. Living 30km outside the city also means we can’t just walk out with a mop and bucket and get stuck in (although I did drive into the city yesterday to try just this and felt a little conspicuous walking around a neighbourhood I didn’t know with my broom!) So we’ve offered support to friends where we can, and will turn out for the community clean-up day on Sunday. In the meantime, we’ve tried to stay cool (because the sun has finally appeared and it is roasting!) and keep busy at home. Somehow, just relaxing outside with a book hasn’t seemed right when people just down the road are still sweeping mud out of their homes, so, in sympathy I suppose, I’ve cleaned the house from top to bottom (I felt that should even include the oven), decluttered the wardrobes, sorted through 3 years worth of uni papers, had a cosmetics audit and a handbag amnesty and taken bags of stuff to Vinnies.  It has been quite therapeutic. By next weekend, most people will have returned to work and I can justify tackling more ‘normal’ activities, like focusing back on the van. And maybe lying in the sun for ten minutes.