After the overindulgence last week of filling both sinks to the brim to test the campervan’s plumbing system, came the inevitable morning-after headache when we tried to empty them. The main problem has been finding fittings to connect the various flexible pipes to their respective tanks. But, with a bit of wrestling and a lot of silicon, everything seems to be secure and the cabinets have stayed dry! The only unexpected outcome is when we empty out the bathroom sink, the kitchen sink fills up: 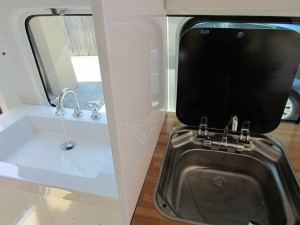 Apparently it’s because our driveway slopes downwards, although I may keep it up my sleeve as a last-ditch party trick if we ever end up at a particularly sociable campsite.

This is the waste water tank, secured into place with some luggage straps.

The main grey hose leads into the tank from the two sinks, and we can empty it out via the blue tap at the bottom, which leads to an outlet with a normal hose connection: 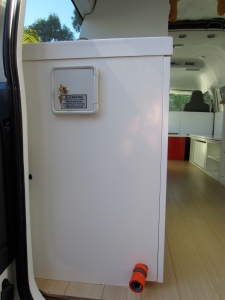 We fill the cold fresh water tank up from the inlet pipe:

The pipe was a bit too wide to fit through the standard inlet connection, so Paul heated the end in boiling water until it was soft and pliable enough to fit. When the pipe cooled, it expanded back to its previous size and filled the hole nicely. 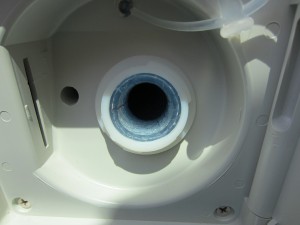 From there, it runs around the back of the waste water tank and into the fresh water tank:

The vertical pipe is a ventilation hose, which exits just to the left of the inlet hole (see above), and the metal bracket at the front holds the tank in place.

The real test for the whole plumbing system will come when we’re bumping along one of Queensland’s finest outback roads with a full water tank; it may be prudent to fill our limited storage space with more emergency mops than emergency cardigans for our first few trips.

A splutter, trickle and finally a whoosh…and (with only one small-ish flood) we had two sinks full of water!

To install the plumbing system we used:

We ordered everything from Caravans Plus, and were incredibly lucky that having built the cabinets in advance without any tank measurements, everything just fit with millimetres to spare. We were also pleased to come across the electric water heater, which had only just come on the market.

Most water heaters seem to run off gas, but with our gas tank on one side of the van and both sinks on the other side, it was going to be hard to lead the gas pipes across. We also didn’t want to use gas any more than necessary. The electric heater connects into the 240v system, heats the water to 70 degrees and then loses around one degree per hour. So we can be unplugged for 24 hours and still have relatively warm water.

The system was installed in two stages, with the plumbing and electrics. Here’s an overview:

The cold water tank is on the right, and Paul added a water level gauge, which is wired into the indicator by the door: 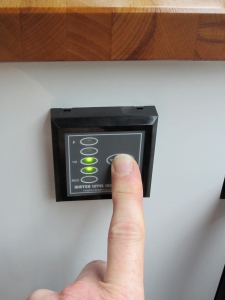 The photo below shows the plumbing system in more detail:

So following the circuit above:

The water pump connects to the 12v battery via a 15 amp fuse – the cable runs behind the fridge through the conduit in the doorway and round to the battery. 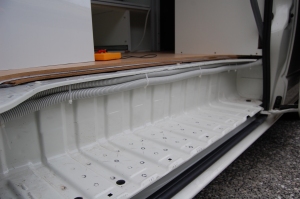 The electric heater has its own power point, which is wired into the fridge’s power point to link into the 240v system – this saves running two cables around to the 240v input socket on the other side.

I’ll cover the input pipe and drainage in the next blog. So if, by any chance, you’re attempting your own plumbing and following these steps, don’t turn your taps on just yet!

Hurrah! We finally have a full complement of cushions. Here in the seating configuration: 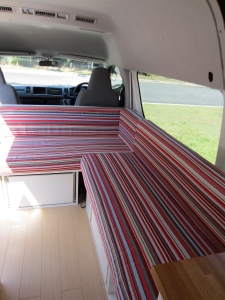 I had to step down the height of the backrests slightly so they would still fit side-by-side in the bed configuration:

I still need to adjust the padding on some of them but they’re almost there. Step-by-step instructions to follow shortly!