When we first started building the campervan, a popular discussion was whether to install a pop-up roof to give us some extra head height inside. Actually, I’m not sure it ever really evolved into a discussion as such, it was more a case of:

Me: Please can we have a pop-up roof?

It would have been a huge and expensive job to raise the roof, and seeing as we’re never going to spend a lot of time meandering from one end to the other, it’s been the right decision.

Yesterday though, we did enjoy a brief taste of vertical freedom, and were momentarily permitted to uncurl ourselves out of a nicely perfected stoop and stretch out to full height. 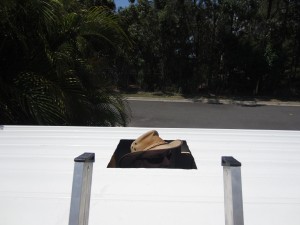 Admittedly it was a bit restrictive, and we couldn’t move our head for fear of being garotted but it was exciting nonetheless.

The hole is for our ceiling ventilation fan, which will provide a welcome through-draft during the summer months. Our fan is a Fiamma Turbo Vent P3.

So, how to install it: 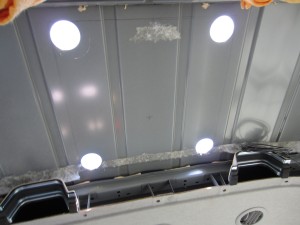 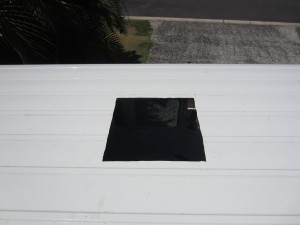 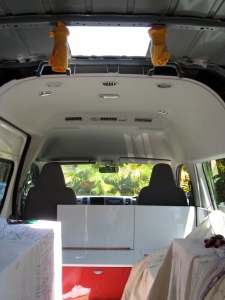 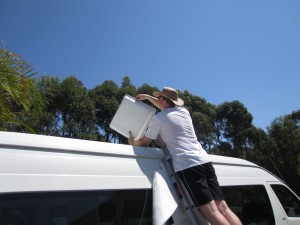 At this stage Paul was on top of the roof screwing the bolts down while I was inside holding them from underneath, and trying to dodge the long drips of silicon that squirted through every time he put a screw in. (I can attest to its waterproof qualities though, it is still adorning my hair three showers later). 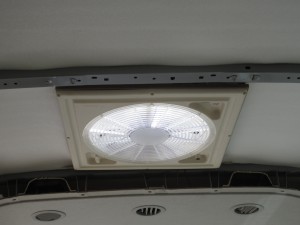 You turn the handle to open up the roof, then switch it on. Ours provides an amazing breeze and should cool the campervan down pretty quickly. It does sound like we’re about to take off if we turn it up very high, so it’ll be interesting to see if we can use it at night.

As the pictures above show, Paul has now also insulated the ceiling using the remainder of the flooring insulation, so thankfully our hair no longer starts to sizzle when we bump into the metal ceiling. Next stage is the lighting!