Tues 11 October 2010
So after a seemingly endless, global search that saw us trek out to car yards as far away as Strathpine and Acacia Ridge, we’ve finally found the perfect van, hurrah!!

Paul had very precise requirements, and was starting to lose hope that there were any Toyota commuter vans in Queensland that represented exactly what he wanted (i.e. diesel, automatic, low mileage, low cost, no signage emblazoned on the side, one careful lady owner etc). We had seen and discounted quite a few for various reasons, and unfortunately every salesman we encountered had the same reaction, exclaiming with a sharp intake of breath and a shake of the head that they were as ‘rare as hen’s teeth’.

Not to be defeated, I logged on to carsales.com last Friday morning with the now ingrained list of requirements, and at the top of the list was a lovely looking van. It was petrol, not diesel, but other than that, it seemed exactly right. A 2006 model with only 41,000 km on the clock and best of all, it was $32,000 – $3,000 less than we thought we’d have to pay. It had somehow slipped through the cracks on Paul’s search, but he agreed it looked promising. That evening, Paul rang the contact number listed, and the guy said he had theoretically already ‘sold’ it to two people who were scrambling to arrange their finance, but if we could promise cash the following day, it was ours. Well. That was a turn up for the books.

Keen not to be gazumped ourselves, on Saturday morning we drove in torrential rain to yet another interesting Brisbane suburb, Rocklea, where we met the owner in a printing & signage workshop where the van was being stored. It had recently come across from WA, where it was owned by ABC Childcare. It wasn’t too good to be true, it was a beautiful van – clean and shiny with no dents and hardly any wear inside. It also came with a free fire extinguisher!

We gave it a thorough test drive in the garage, and then dashed to the bank down the road for a cash deposit before he could sell it to anyone else.

The owner was great, and promised to arrange for all 12 rear seats to be taken out, get it certified as a 2-seater vehicle and also re-register it in Queensland – all without charging any extra!

Sat 16 October
Paul drove back to Rocklea yesterday to transfer the rest of the money and drive the van home – sans 12 rear seats. Luckily it fits perfectly down the side of the house. So here it is: ooooh, aaaaah. 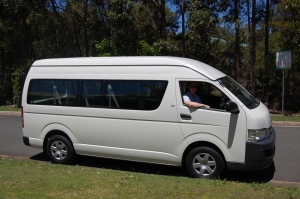 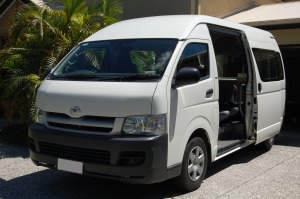 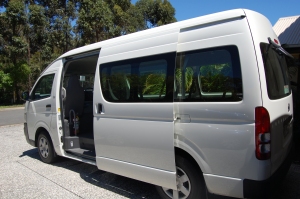 Sat 23 October
The first job was to get the windows tinted, which Paul arranged at Auto-Tint in Capalaba. They used the darkest legal tint and promised no bubbles. It looks pretty good: 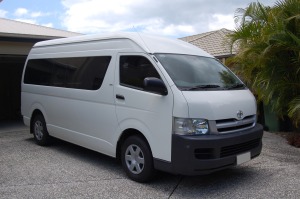 In the afternoon we also joined 5,000 other people wearing this season’s pac-a-mac at the Brisbane Caravan and Camping Sale. It was good to check out the various fixtures and fittings, including lighting and sinks, that we can use in the van, although admittedly we spent most of our time swooning at the fantastic Winnebagos that slept about 16. Our van does not resemble a Winnebago. We found a conversion company who were helpful, and can do either the whole van or just the tricky bits. The look on Paul’s face suggested he would quite like someone to do the whole van, so we had to make a swift exit.

At least we can get a quote for just doing the cutting work to install the gas bottle and ventilation.

Fri 29 October
It’s all systems go. One of Paul’s colleagues has done a 3-D design of the van, which shows everything should fit in well, with our living / dining / sleeping area at the front, a kitchen in the middle with hob on one side and sink on the other, and a tiny bathroom at the back:

Sun 31 October
Paul spent all day yesterday building a mock frame inside the van, to show where each bit will sit. Here you go: 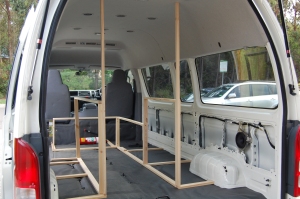 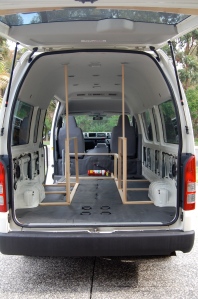 The only issue that keeps rearing its head is the height of the van inside. It’s 156m high, and because I’m 170cm and Paul is a bit taller, it means that spending any length of time standing or walking through induces a rather stiff back and neck. One option is to raise the roof an extra foot or so with either a hard or soft pop-top so we can freely move around, but Paul is not keen. 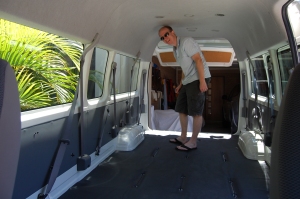 Cutting the roof off would obviously be a major job, fairly expensive and not particularly one for the driveway. It would decrease the rigidity inside and make it hard to have an internal wall separating the bathroom (particularly with a soft-top), reduce fuel efficiency and limit the number of multi-storey car parks we could frequent.

Of course, we won’t be spending long periods standing or walking inside however high the ceiling is. But it seems a shame to spend time building a lovely kitchen and bathroom if it’s then too uncomfortable to use them. Anyway, lots of people have tried to persuade Paul and he is having none of it – he says I can fry his breakfast kneeling down at the cooker. Hilarious.
Sun 7 November
We’ve had no luck with the conversion company, who as it turned out were not interested in just doing part of the job. So Paul’s going to tackle it all himself – any excuse for another trip to Bunnings to buy some shiny new tools.

He ordered a stainless steel box for the 9kg gas bottle, which arrived this week. The plan was for it to sit underneath the seating bench but it’s a bit tall, and means when we put the seat cushion on top, the seat will be at window height. To avoid passers by getting a perfect view of our derrieres through the (albeit beautifully tinted) windows as we sit and enjoy our cups of tea, we might have to get a smaller gas bottle, that fits under the seats as we planned. A 2.5kg bottle should be fine just for weekends away anyway.

Sun 20 November
There were a few sweaty palms today, as Paul had to cut a nice round hole in the side of the van for the electrical power point. I can’t imagine there’s much demand for minibuses with portholes, so there’s no going back now!