So with a week off over Christmas we deviated from our well-worn route to the coast and ventured inland, for our longest trip away in the campervan. We spent our time circling Queensland’s Granite Belt, 3 hours south west of Brisbane, staying first at Queen Mary Falls near Warwick before driving down to the orchards and vineyards of Stanthorpe.

Our campervan was only designed for mini-mini-breaks, but it coped well with the extended trip. The fridge held enough food for a week (mostly leftover turkey and cold chipolatas), and our narrow shoe cupboard found its true calling as a wine cellar! So we redistributed the shoes and stocked up on some of Queensland’s best vintage. (Which was better than we thought!)

We coped well with the longer stay too. Or, we were coping, until Paul announced on the fourth morning that we were entering unchartered territory, at which point I suddenly began misjudging the low ceiling height and my back decided to give way in protest at the unsprung mattress cushions. Still, two mild concussions and the price of a heat pack were a reasonable price to pay for a week’s holiday.

Queen Mary Falls are part of Main Range National Park near Killarney and the border with New South Wales. Also nestled in the same rainforest and accessible from that stretch of road are Browns Falls and Daggs Falls, providing lots of lookouts and photo opportunities.

Our campsite was right opposite Queen Mary Falls, where you can walk a short distance to the top of the falls or around a longer circuit to the base. Or you could abseil, of course. 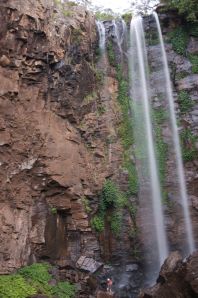 The walk to Browns Falls was more challenging, requiring a few leaps over precarious stepping stones and a bit of tarzan swinging around trees. Not one for wheelchairs or pushchairs, although while I was psyching myself up for one of the river crossings, we were overtaken by two elderly ladies, so maybe I was being overly cautious.

As you’d expect, the area is teeming with wildlife and perfect for birdwatchers. For us, it was a peaceful antidote to the rush and excitement of the previous Christmas weeks. 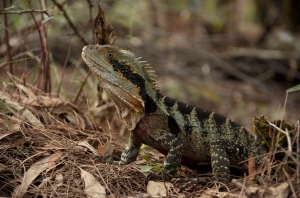 After three days we drove south to Stanthorpe, along the very bumpy New England Highway. There is loads to do in the area. Actually even more than we realised, as I discovered back at work when my colleague said:

‘Did you go to the jumping police dogs academy?’

‘Oh but you must have seen the giant granite frog?’

‘I can’t believe you didn’t even visit the famous maze!’

Hmmmm. We did, however, visit lots of wineries.

Armed with our Granite Belt vineyard guide, it was recommended we head to some of the 5* wineries just north of Stanthorpe first. That didn’t provide the most auspicious start though. 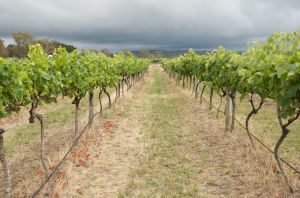 Which was very pretty, but these storm clouds burst just as we left the campervan, so we dashed back inside and made a cup of tea instead.

Thankfully things cheered up as we drove south, helped by the appearance of the sun and the much prettier landscape. The frequent cattle grids on the back roads attest to the vast number of cows and horses in the surrounding farmland – some of the most beautiful horses I’ve ever seen. 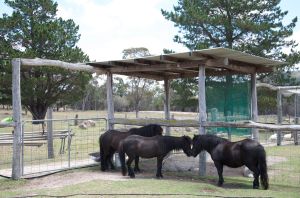 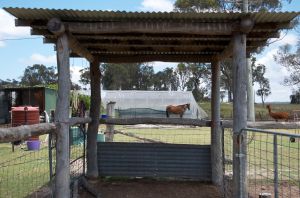 The only other wine region we can compare the Granite Belt to is Margaret River in Western Australia, which produces world-renowned wines and is generally a much wealthier region. It seems unfair therefore to rank Stanthorpe (whose wines are largely unknown outside Australia) in the same category, and the wineries are certainly smaller and less luxurious than in Margaret River, but they’re friendly and welcoming and we were pleasantly surprised by the quality and variety.

We tasted lots of wine (although not nearly as much as was offered), we bought lots of wine (thanks to our shoe cellar) and we took lots of photos of wine and vines.

It’s not all about the wine; as the region implies, there is plenty of granite around and in Warwick you can do a short walking tour of the historic granite buildings.

The best evidence though is in the very impressive Girraween National Park, which features huge granite boulders and ‘the Pyramid’: a steep, rocky cliff-face which is not for the faint hearted, but affords panoramic views at the top. (So says Paul anyway, I found the views panoramic enough at the bottom. It was 35 degrees!!) 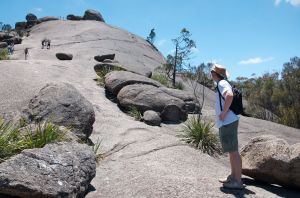 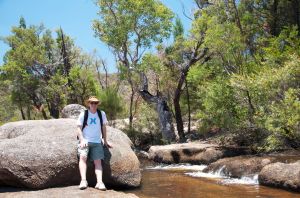 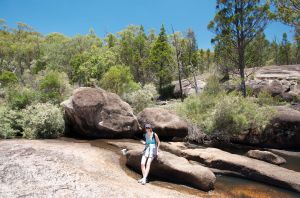 Back on the highway and there are plenty of other treats to keep you occupied if you need a break from hill climbs and wineries (and can’t find the giant granite frog): lavender farms, olive farms, cherry farms, apple orchards, soaperies and gourmet produce outlets. It’s the perfect location for a foodie escape.

Campsite reviews of Queen Mary Falls and Top of the Town at Stanthorpe coming soon!