Pragmatism. noun 1 the art of dealing with things in a practical rather than theoretical way. 2 the art of embracing campervan cushions as a practical seating application even when the corners are theoretically lop-sided, sticky-out or have a tiny hole in the middle.

I started off with a rather romantic notion of making these cushions; being holed up at my sewing machine on a Sunday afternoon with a nice cup of tea, radio on and the heater warming my feet. When I realised I was actually quite good at sewing in a straight line, I was already converting my desk into a sewing table and planning all sorts of ambitious projects.

The vision was shattered as soon as I reached my first corner. The general idea with a box seat cushion is to have a top and bottom panel, a side strip that runs around three sides and a back panel with a zip. None of this sounds too complicated, but whichever method I try to sew the side strip around the corners, they look completely different. 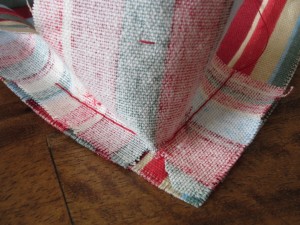 I have dusted off my library card and tried four different patterns. Through the wonder of YouTube, I’ve had lessons from Darlene in Detroit and taken advice from Barry in Texas. I’ve tried the meticulous ‘pinning and pressing’ method and the more kamikaze ‘just snip and pivot’ method (that was Barry) and nothing seems to work consistently. Every time I think I’ve cracked it, no sooner have I made a celebratory brew than I line it up with the opposite corner and realise it’s two centimetres lower. 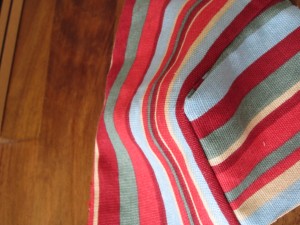 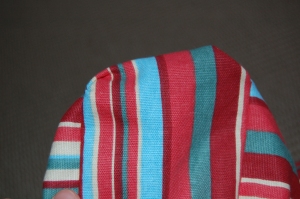 So after several frustrating weekends at the sewing machine growing increasingly despondent, I came to the conclusion that imperfect corners would just have to do. I would take a pragmatic approach and just get them finished. Shamelessly seeking reassurance that my corners were, in fact, brilliant and I was being way too hard on myself, I showed Paul a selection and asked for his honest opinion.

And in the next moment, in a brief memory lapse when all the rules that had been carefully instilled over the last 12 years were inexplicably discarded, there was a pause. A frown. A very close look at the seams. And then, ‘Hmmmm. Yes, I see what you mean.’

Followed by a look of complete surprise when a fine plume of smoke started escaping from my ears.

‘But, you said you wanted…’

‘I DIDN’T MEAN IT! I WANTED YOU TO SAY THESE ARE THE FINEST EXAMPLES OF CUSHION CORNERS YOU HAVE EVER SEEN AND WHY HAVE I NOT JOINED BARRY AND DARLENE ON YOUTUBE WITH MY OWN SERIES OF SEWING VIDEOS’.

So that’s that. It’s back to the drawing board. But, having relayed the whole sorry story in a long teleconference, Mum has come up with a new plan of attack, which requires sewing no corners whatsoever. Round cushions! Actually no, that will be a very last resort, but I will try the new method this afternoon and report back. Meanwhile, the heater’s on and the radio’s blaring, but I may add something a little stronger to my tea cup.