Straight down the Pacific Highway, of course. After a busy few weeks at work, Paul and I had been craving a quiet, relaxing time over the five-day Easter break. So I think we were both a little surprised to find ourselves not heading to the coast, but ensconced in a crowd of other frazzled couples being herded along the pathway at Ikea. A pathway from which there is no escape. No early exit strategy. Everywhere you look people are frantically searching for a little pink card that says ‘Move directly to marketplace. Do not pass go. Do not collect £200.’

Anyway, the plan was to look for a wooden work surface for the campervan kitchen. This was an about turn really; we’d always been keen to avoid the traditional pine look that you see in so many pictures of converted campervans, and were planning to use a pale laminate for the kitchen surfaces instead. But Paul loves working with wood, and was concerned that the interior was starting to look too white and sterile. I am inclined to think once we introduce the red cupboard doors and stripy seat cushions it’ll be hard to see any white, but I do quite like the idea of a solid wooden surface. Like one huge chopping board. So we’re hitching a brief ride on the pine-look bandwagon and have bought an Ikea Lagan worktop. It was almost 2.5 metres long, weighed over 30kg, and only just squeezed in the car (barely leaving room for my Ikea purchase: a single fluorescent dishwashing brush, which was looking a bit forlorn at the bottom of my huge yellow bag).

Paul’s cut two pieces of wood to fit each side of the kitchen and has given it about five coats of timber oil. He chose a Danish wood oil in the hope it would get along nicely with its Swedish wooden companion.

Wood before being oiled

In other news, Paul’s been doing some finishing touches on the cupboards and has boxed in the wheel arch at the back of the main kitchen cabinet, using the same laminated wood he used for the walls.

Finally, the prize for this week’s most interesting photo surely goes to: 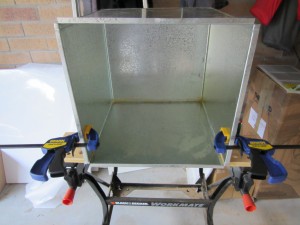 This is the steel box that Paul has resized for the gas bottle, so it will snugly fit our 2kg gas bottle rather than the 9kg one it was intended for. A bit of hacking and a lot of sticking has saved us sending the original box all the way back to NSW.

Earlier this week we had a bumper delivery from Caravans Plus which included a stove, kitchen sink and roof fan, so Paul’s going to tackle some of those this weekend.